This is the principal room in the Museum dedicated to the apothecary’s most ancient and indispensable tool: the mortar. 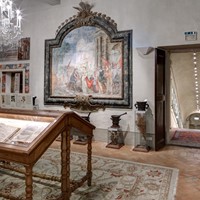 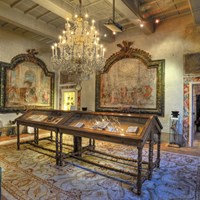 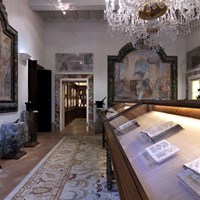 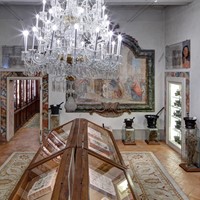 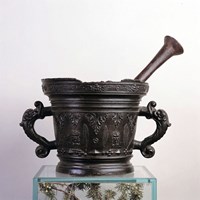 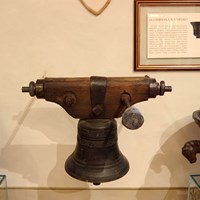 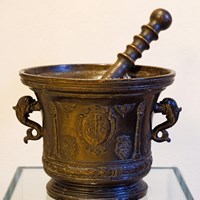 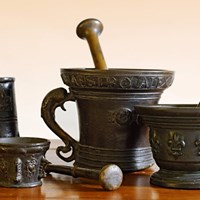 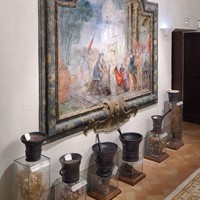 In the first room of the museum, extremely precious examples of ancient mortars are exhibited, the apothecary’s main tool of work.

Over the centuries, different materials have been used to make it: alabaster, hard stone, marble, iron, silver, copper, wood, terracotta, ceramics and glass. But bronze is the alloy that embodied the ideal material for the apothecary: resistant, cohesive, non-porous, so that the ingredients within it are not absorbed during the grinding process. The shape remains very simple until 1300, when the only decorations were vertical ribs or simple knob grips.

It is 1500 when the mortar becomes a highly prized objet d’art, and by the end of the 1700’s, the sides are embellished with floral decorations.

Plants and flowers also feature in the illustration plates taken from the ancient herbariums preserved in the Bibliotheca Antiqua of the Aboca Museum, displayed in the display cabinets in the middle of the room. They take prime position to describe how important the botanical illustrations have been as a tool to identify plant species and even today, thanks to these illustrations, historical-scientific research on botany and the healing powers of plants is continued by experts in the sector. 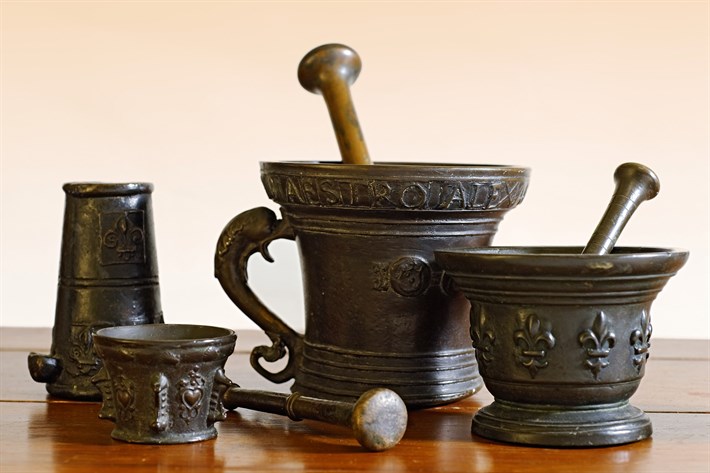 Since 3000 b.C. Babylonian knew and cultivated already many plants to medicinal scope. On some clay tablets are described, by cuneiform characters, the therapeutic virtues of aloe and deadly nightshade and are also boasted Indian hemp's analgesic property. There is as well mentioned the doctor's figure whom cures with plants. General idea was that Aura Mazda, the good health divinity, had created at least a plant in order to recover every disease.
Embalming art has been developed in Egypt on the base of phytotherapic acquaintances and on the ability to extract from plants essences and resins, substances with antimicrobe property like turpentine and myrrh. Egyptians (3000-1000 b.C.) knew more than seven hundreds natural medicines.
The most famous document is Ebers' papyrus (1550-46 b.C.), a forerunner pharmacopoeia as specified from the first words of the book: "Here the book of medicines' preparation begins suitable for all part of sick man's body".
Five hundreds medicinal plants with their property are listed, like castor oil plant, giusquiamo and opium.

Between 2500 and 1500 b.C. indian medicine (in Sanskrit: Ayurvedic) used six hundreds of medical plants, like black elleboro which was used to purge and to cure mental deseases, ginger, considereted as miracle cure and gentian, good to give strenghtness and long life. A really ancient induist medicine, which comes from an indian plant, was the source for the first modern tranquillizer.
Herbs therapy and acupuncture were born in China almost three hundreds years ago. Pent' sao Shing (2700 b.C.) is one of the oldest phytotherapic book. Chinese people knew ginseng's therapeutic virtues, it was considereted aphrodisiac and a good tonic treatment, effective against sterility but also for rheumatism and cataract. Efedra, liquorice, artichoke, celandine, rhubarb, pomegranate, saffron, colchico, lichen, parsil, ivy and broom were well known as medical plants.

Plants constituted the basic elements of Greek pharmacopoeia ( Vth century b.C.). In Corpus Hippocraticum (Vth century b.C.) is prescribed vegetable remedy for every kind of disease and vis naturae is emphasized (the nature's healing power).
Ippocrate had already characterized willow's pain-relieving property . The first one to consider scientifically classification and use of plants was Teofrasto (IIIrd century b.C.). Many species cited in its Historia plantarum are in use still today. But the first true plant's list, in the matter of their affinities, is in Dioscoride's De materia medica (Ist century a.C.), an enciclopedic work that has had the greatest authority during that time. 519 plants are mentioned, their medicinal property and their pharmacological employment: herb millefeuille and comeantelmintico fern, for example, are advised like anti-inflammatory.
One of the precepts followed was: I believe there is no other way to discover precise knowledge about nature outside of medicine.
The first Greek erudite to deal with scientific classification and the use of plants was Theophrastes (3rd c. BC), who studied at the School of Aristotle. Many of the species mentioned in his Historia plantarum are still in use today.

Galen (2nd-3rd c. AD) was responsible for conceiving the four humours of the body (blood, phlegm, yellow bile and black bile). He also created a system to categorise the different pathologies and their corresponding remedies that fell within the framework of a revised and improved Hippocratic humoral theory.