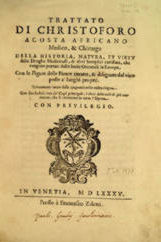 Born in the colony of Mozambique, Christoval moves to Portugal to obtain his degree in medicine. A passionate lover of adventurous voyages of exploration, who even ends up tangling with pirates, he takes advantage of his sojourns in Asia to gather plant and animal medicinals. He is warmly welcomed in Goa, where he remains at length for work and study. When he returns to Burgos, in Portugal, he dedicates himself, in the tranquility of a convent, to medical practice and to the writing of treatises.

Botanical interests: His passion for botany and medicinals leads Acosta to undertake serious research in the Eastern Indies from which he imports many plants (among them were Pavetta Indica, Mimosa Indica, pineapple and black pepper), studying and describing their medicinal virtues. His interesting work, Tratado de las droghas y medicinas de les Indias Orientales, copied and translated into many languages, becomes one of the classic manuals for pharmacists and herbalists in the 16th century, thanks also to the wood engravings in his treatises which are already of good phytographic quality. The Italian edition was translated by the botanist Melchiorre Guilandini in 1585 and was entitled: Dell’historia delle droghe medicinali.