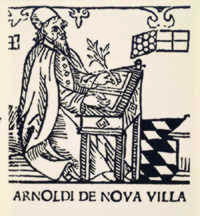 He was born in Provence and dedicated himself initially to literary studies. Later he became enamored of medicine which he studied at the Arab schools of Spain and Paris. He traveled at length in the Iberian peninsula, in France and in Italy and cultivated his knowledge of alchemy and philosophy, falling into disfavor with the Church over religious disputes. He was rehabilitated in the end and finished his days at the Papal court in Avignon.

Botanical interests: He his one of the most important and legendary alchemists but above all a universal scientist. His medical practice includes astrology and magic and his works also incorporate theology, oneiromancy (divination through dreams) and philosophy. In medicine, in the Breviarium practicae (published in 1483), he addresses all the diseases known during his time. He groups these into physical, functional and subjective symptoms and differentiates their causes into determinant (etiological), antecedent (hereditary) and combined. He learned from the Arabs and introduced into Europe the use of alcohol, useful in the preparation and preservation of medicinal products. In botany, he dedicated himself to the study of herbal medicinals and to the therapeutic use of plants and the utilization of theriac. His recipes indicate that aromatized wine is a good tonic; in one study, he speaks with conviction on the beneficial use of hydrotherapy. His principal works are: De Vinis, De Venenis, Causilium ad regem Aragonem de salubri hortensium..., Tractatus varij..., De regime sanitatis.