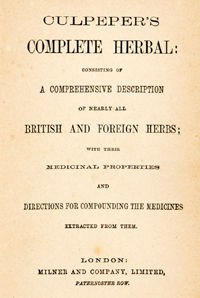 he graduated in medicine at the University of Cambridge, at the same time cultivating a strong passion for pharmaceutics and worked as an apprentice in a local chemist’s. He became famous thanks to his studies in astronomy, in spite of the contrasts with other physicians and the papal excommunications he earned because of his theories. He translated into English important works on medicine, such as the Ars parva by Galen and the works of Rivière and Vesling. He also wrote an English version of the London Pharmacopoeia that had always been written in Latin before, thus earning the dislike of his colleagues who accused him of being a poor and ignorant physician.

Botanical interests: it was his passion for botany that led him to publish The Herbal, released for the first time in 1653 and then republished in various revised editions. It is a very popular practical handbook which became widespread in the North American colonies too and includes a review of the publication edited by Milner&Co. The format chosen for this edition is the 16th.