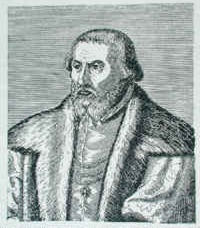 Originally from Siena, Mattioli followed his family to Padua where he attended courses in medicine. He practiced medicine in various Italian locales before establishing himself in Trent where he began to take a great interest in botanical studies. He furthered his botanical studies in his successive stays as chief physician in Gorizia and Vienna. He was held in great esteem and sought after to the point that he became known as the physician of the three sovereigns. Immersed in his studies and work, he ended his days in Trent, a victim of the plague.

Botanical interests: An important scholar of medical botany, Mattioli manages to condense in his Commentarii al Dioscoride (first edition 1554) all of the herbal knowledge of his times. He increased the number of plants described by Dioscorides from 600 to 1,200 and provided for each a description, history and indication of medicinal uses and virtues. Always taking the teachings of the ancient authors into consideration, he inserted the new plants imported from the Orient and the Americas and also noted all of the popular traditions and pharmacopoeias of his own time. The phytographic aspect of the images, executed by the best engravers of the Italian and German schools (Liberale and Meyerbeck), is precise and useful in recognizing the plants. The "Discorsi" underwent many editions and were translated into Italian, French, German and Bohemian. In the field of medicine, he is remembered for having suggested the use of mercury in the treatment of syphilis in his De morbi gallici curandi ratione. Among his principal works are: Compendium de plantis omnibus... (1574), De plantis epitome (1586).