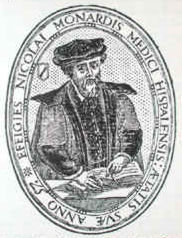 He was born in Seville, probably in 1493. According to the little biographical information we have, he passionately studies humanistic subjects and medicine. His studies begin in Alcala and end at the University of Seville in 1547. He works successfully as a doctor in his home town, while at the same time he trades medicinal plants and the new botanical species coming from the Americas. One of his most important works is "Dialogo llamado pharmacodilosis", in which he follows the humanistic school of thought and suggests the study of classical authors, in particular Dioscorides. His first works on natural sciences are about roses, "De rosa et partibus eius", "De succi rosarum", "De rosis persicis seu alexandrinis" in 1540, and about citrus fruits, "De malis citiis, aurantiis et limoniis". The work "Dialogo del hierro" (Dialogue on iron) published in 1574 and the treatise "De dos medicinas excellentissimas contro todo veneno" are also interesting. His most famous and significant work is "Historia Medicinal de las cosas que se traen de nuestras Indias Occidentales", completed in 1574 and translated into six languages, among which Latin, for a total of forty-two editions. Botanical Interests: He studied and used ancient “simples,” but he became famous in all of Europe for his knowledge and description of the medicinal plants from the New World, tobacco (nicotiana) in particular, indicating its positive uses and its abuses. His writings and his experiences as a researcher made him known in all of Europe, so much so that his works were translated into Latin and English. The herbaceous genus “monarda” was dedicated to him, a perennial plant, originally from North America, that he introduced. Among his principal works are: Delle cose che vengono portate dall’India… (1582), De semplicibus medicamenti (1574). ORIGINAL WORKS AVAILABLE ONLINE IN THE ABOCA LIBRARY Delle cose che vengono portate dall’Indie Occiden

Botanical interests: He studies and uses "simple plants", but he becomes famous all over Europe for his knowledge and description of the medicinal plants of the New World, in particular tobacco (nicotiana), of which he describes uses and misuses. His studies and researches make him so popular that a plant will be named after him, "monarda", a perennial plant of North America that he introduced in Europe.