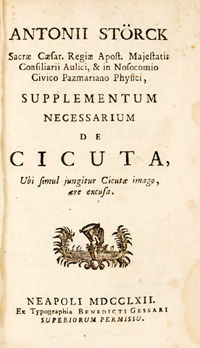 General physician and personal doctor of Maria Theresa, Empress of Austria, Anton Storck spent many years studying and writing treatises on poisons. We include here a review of his work Libellus quo demonstratur stramonium, hyoscianum, aconitum..., written in 1762. The following year he published an important booklet on a similar subject, the Libellus quo demonstratur: colchici autumnalis radicem, non solum tuto posse exiberi hominibus, sed et eius in usu interno curari. He was a professor at the faculty of Medicine, University of Vienna and became chancellor of the same University. He was a highly respected figure in all European circles and was considered to be the reformer of Austrian medicine. He died in Vienna in 1803.

Botanical interests: In his works he studied the most well-known poisonous plants, such as colchicum, stramonium, hyosciamus, aconitum and hemlock.