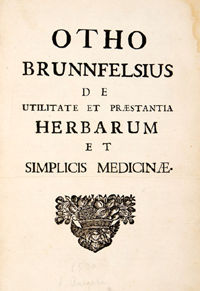 Otto Brunfels is considered by historians and Carl Linnaeus to be one of the fathers of European Botany. Born in Mainz in 1489, he studied medicine, theology and botany. After living in a Carthusian monastery for a few years, in 1521 he was converted to Lutheranism and moved to Strasbourg where he taught and preached his Lutheran faith. He wrote several theological works as a personal contribution and support to his religious faith. However, in 1532 he put aside his devotion and moved to Bern to join the army as a medical officer. He spent many years revising his botanical masterpiece Herbarum Vivae Icones, creating detailed plant image files, collecting drawings and supervising the work of his assistant and drawer Hans Weiditz, who saw botanical images from a different perspective. The first Latin version of Brunfels’ work was published in 1530. A second edition was printed in 1531 and a third one in 1536, two years after his death. The German version of his work was published with the title Contrafayt Kreuterbuch.... The De utilitate et prestantia herbarum et simplicis medicinae is part of the Herbarium vivae icones and includes Weiditz’s marvellous drawings. All works of Brunfels are listed in the most important bibliographies of botanical works.

Botanical interests: Brunfels had a very good knowledge of the subject and was particularly interested in the identification of medicinal plants. His works, together with those of his contemporaries Hieronymus Bock e Leonhard Fuchs are very important in the history of botany.