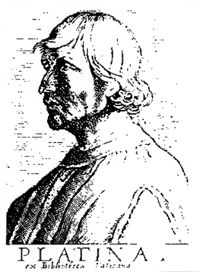 Bartolomeo Sacchi was born in 1421 in Piadena, near Cremona, town called in Latin Platina, hence his nickname. He is an important Renaissance humanist, interested in literature and popular traditions. He begins his career as tutor, first for the Gonzaga family, then for the Medici family. He moves to Rome in 1642 to work as secretary for the Cardinal Francesco Gonzaga and as official responsible for bulls for Pope Pius II and Pope Paul II, with many up and downs. In 1478, under Pope Sixtus IV he is appointed to the prestigious position of director of the Vatican Library. Here he writes a well-known book about the biographies of popes: "Liber de vita Christi ac omnium pontificum". Furthermore he publishes "De principe", "De vera nobilitate", "De falso et vero et bono". Nevertheless his most important work is "De honesta voluptate et valetudine", published in 1480 in Cividale del Friuli, the first work published by Gerardo da Fiandra in Friuli. Bartolomeo Sacchi dies in Rome in 1480.

Botanical interests: The chapters of his main work"De honesta voluptate", regarding cookery, show a good knowledge of food and spices.