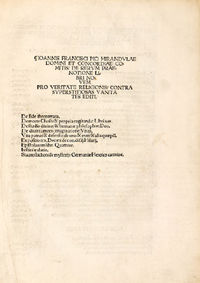 Born in Mirandola, Italy in 1463, he studied canonical law and theology at the Universities of Ferrara, Padua, Pavia and Florence, where he could approach and cultivate his interest for humanism and meet some of its most important exponents like Poliziano and Lorenzo de Medici. He spent some time working for the Platonic Academy in Florence and in 1485 he went to Paris where he lived for a while. After going back to Italy he started to study oriental culture and in particular Chaldaic and Hebrew. He wrote nine hundred Conclusiones, which followed the platonic model and immediately aroused the strong opposition of the Church. He was accused of heresy and therefore imprisoned. He found shelter and protection in the quiet of Lorenzo de Medici’s palace, where he wrote his works: Apologia to defend his Conclusiones and Epistolae which are a collection of suggestions directed to his nephew. His work is not systematic and could be considered more poetic than philosophical, as he wrote under the influence of the neoplatonic philosophy, very popular at the time. Man can control both life and the forces of Nature, also with the help of magic. This is what he says in the Eptalo, in which he shares his views and beliefs on the mysterious origin of the world. In his works, De hominis dignitate and De Ente et Uno, he talks about the cabal which synthesises all mysteries of Christianity and ancient philosophies. According to the author, humans are creatures similar to God for their power to create. Pico della Mirandola became famous and is remembered for his extraordinary mnemonic skills and intelligence. He had a very busy life and died in Florence in 1494. Just before dying he wrote a melancholic and touching poem called "Felice è chi de vita è spento in cuna" (Happy is a man whose life comes to an end in his cradle).

Botanical interests: His culture was eclectic and encyclopaedic but he did not write anything in particular on the vegetable world.