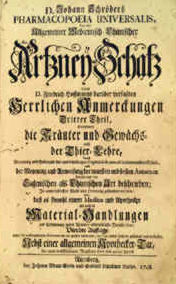 Johann Schröders was born at Sazurffein. After taking his degree in medicine, he became interested in the study of pharmacology which he furthered both from the point of view of history and research. He practiced in Frankfurt where he enjoyed recognition and praise for all of his publications.

Botanical interests: Schröders’advanced studies were an authoritative base for more than a century and his Pharmacopoea universalis (first edition 1674) was republished after 100 years. The treatise describes the remedies used by physicians. Leaving surgery to one side, the "remedies" are presented in two broad classes: alimentary and pharmaceutical. Of the first, he offers a detailed description in the culinary arts. He distinguishes the second into simple and compound remedies, bearing in mind the constitution (odor, taste, shape), the usurpation (method of administering it) and the signature (way of knowing its virtues). He takes astrology and meteorology into consideration, borrowing elements from the followers of Paracelsus and Galen. His suggested method of picking herbs is unique: he supplies tables, novenas, schedules for uprooting(harvesting) and storage. The recipes and remedies he proposes are "fanciful" at the least and repropose ancient popular medical beliefs. The text illustrations are unique and well made.