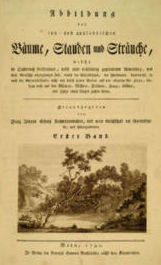 Franz Johann Schultz was an Austrian naturalist and botanist who worked in Vienna at the turn of the 19th century. We know little about his life, only that his only work attracted much attention and was placed in the Imperial Library of Vienna during his lifetime.

Botanical interests: Schultz turned his attention in particular to the description of ornamental trees, fruit trees and shrubbery. The Abbildung... (1792) is an important and esteemed collection of 400 hand-painted water-colored plates of Austrian plants, dvided into three volumes. The plants are depicted in all existent varieties and diversity of colors. The example of the rockrose, which is presented ten times, is the most eloquent.