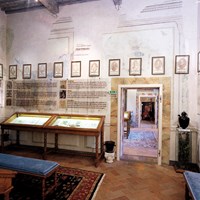 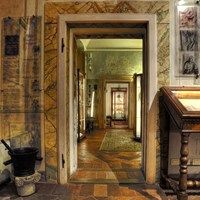 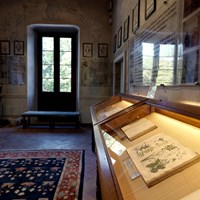 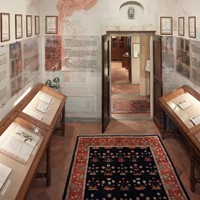 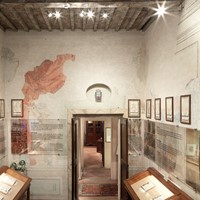 Asclepius, the Greek god of medicine; Hippocrates, the father of medicine; Galen, from whose name derives the Galenic art of preparing medicines; Lavoisier, French chemist; Linnaeus, biologist and father of the modern scientific classification of living organisms, are just some of the names of the illustrious figures who survey the visitor from above as soon as they cross the threshold.

In this room the specialist subject of the museum begins: medicinal herbs placed in their historical context.

The panels in the room guide us on this journey through time and recount how man has used medicinal plants over the course of centuries, from Prehistory to the Middle Ages, from the discoveries of the 15th century to the present day.

Preserved in the wall display cabinets are herbals which expand the collection already seen in the mortar room and testify to the technical and scientific progress in the realisation of these masterpieces of knowledge and art.

A herbal is a book listing the names of herbs and plants, together with the description of their features and properties.
As centuries went by, the evolution of botanical iconography has turned herbals into much sought-after pieces of work, basically for their lavish illustrations.


HISTORICAL NOTES
PREHISTORY
Primitiv human been passes from observation and instinctive employment of curative grass to their intelligent use. But in lack of logical answers he attributes the effects to supernatural entities. Plants often are considered in tightened relation with divinity. The first plants experts are born (shamani).

3500-800 B.C.
Knowledge and acquaintances are developed during ancient civilizations.The oral transmission, practiced until then, is integrated with the written one's (sacred clay tablets, books, manuscripts, registrations walls, etc). Here begin the gap between the cultured use, above all in sacerdotal within, and the popular use of curative grass.

Vth. century B.C.
In Greece, medicine get transformed from empiricist or sacerdotal practice to science thanks to Ippocrate from Coo and its school. The formulation of umorale theory, the principle of olistic diagnosis, the aimed choice of natural medicine, the dosage resource, marks the beginning of allopatic medicine.

Ist-IInd century A.C.
In Rome Dioscoride and Galeno were figures that remained undisputed for all the Middle Ages and beyond. The first one catalogues in organic way the plants' curative property, the second introduces experimental and analytical method, the concept of complexion in umorale theory and composed preparations.

Xth-XIIIth century
In a lay environment, Salernitan Medical School constitutes an happy convergence of medical culture. Latin tradition, in fact, get mixed with Greek-oriental medical culture rethought and commented from Arabs. The interest for dietetic and hygiene integral and complete the acquaintances in the field of therapy with plants.

XIIth-XIIIth century
Crusades, the birth of Navy Republics and the consequent trade activation create a direct and constant flow of exotic remedies; on one side Europe and on the other Africa, Middle-East and Asia; as an example senna, bezoar and alcohol, which get place permanently side by side to the native one's.

XIIIth century
University borns, cultural centers where we find suppositions for future knowledge ration development and a greatest figure has been Alberto Magno. In medicine the study of healthy plants remains fundamental: speziale was born, figure assigned to preparations.

XIIIth-XIVth century
Alchemy places the problem about matter's composition and transformation's metals. As far as it concern particularly the research of quintessence's plants (fifth essencia), which is the responsable substance of therapeutic activity. Also alcohol allows to obtain more effective extracts.

XIVth-XVth century
The Pan-European character of academic culture favors medicinal plants science, in this age begin the association of image to description (herbari), every medical plant is connected by the color, the shape and the taste with the organ or the disease which in position to cure.

In the end of the XVth century
The discovery of America in the 1492 opens new horizons of study and employment for curative plants. Many plants pass from traditional american medicine to current therapeutic use thanks to missionaries and botanists exploratories. Some species, like cinchona, will cover a prominent role.

XVIth-XVIIth century
Prescription pads and Antidotari were born in druggist field, they describe and conform formulation's world. They are approved by civil Authorities and will give origin to Pharmacopoeias, States' official normative books which guarantee the good fabrication quality and the effectivness of medicines.

XVIIth century
Experimental method born, it was premised to scientific revolution in the successive century. In therapy increases the requirement to catalogue plants systematically, to know their composition, to arrive to identification of active substances and to render constant and uniform their activity.

XVIIth-XVIIIth century
Naturalistic studies prevail on doctor-application one's. Botany, which was studied for thousands years in function of medicine, becomes natural science. Linneo introduces classification system for plants based on the fiorale structure as well as binomial denomination still in use.

XVIIth-XVIIIth century
Beginning from Paracelso spagiria, heir of alchemy, is transformed in iatrochimica, science which attribuites the physiological and pathological processes dependence exclusively to chemical phenomena. The base for chemical and structural research start up and it will indicate the decay of plants' use.

XIXth century
In the beginning of eighteenth century in biology is formulated a doctrine about cellular organismes (even though cell is known allready from two centuries before) and in chemistry we assist at the first success about isolation of plants' active substances. The first isolated substance is morphine in 1805. Follow up others, as an example chinina.

XXth century
Modern chemistry isolates and copies single molecules from plants and then productes them industrially by synthetic way. This step is determined from various productive difficulties, but mainly from the possibility to patent the synthesis substances and not those natural ones.

Third Millenium
Man will not be able to survive if he continues to exceed biological laws. It is just this being aware that is opening new and modern spaces of research on medicinal plants (difficultly patentable) in contrast to genetically modified products (patentable).