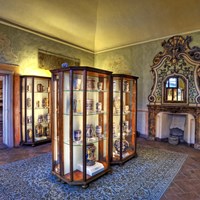 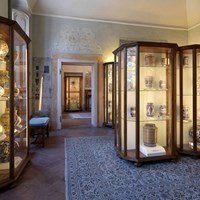 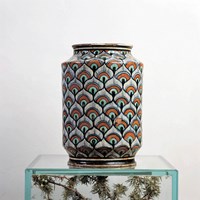 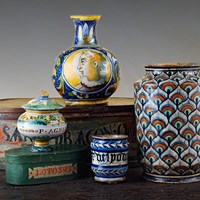 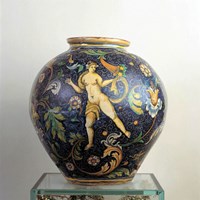 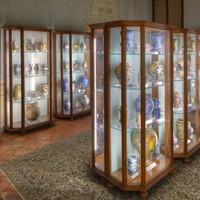 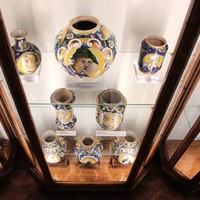 The Pottery Room displays a series of artistically decorated medicinal containers, the result of a long specialised tradition in which Italian craftsmen have been at the forefront ever since the Renaissance.

The eye soon becomes accustomed to the bright colours of the various vessels that enrich the displays: albarelli, jugs, cake stands, and tankards.

As well as searching for a material that was ever more impermeable to improve the conservation of medicinal substances, it was combined with a desire to exhibit ever more artistically decorated vases.

Pottery therefore represented the perfect material from a technical and artistic perspective: impermeable thanks to the vitrification process and light thanks to the tin oxide that made the decoration on the surface stand out to remarkable artistic effect.

Salerno's Medical school (IXth-XVth century a.C.) collected and fused in a cultural unit various traditions of the past: Latin, Hebrew, Greek and Arab.

It is the most ancient and illustrious medical medieval institution of the western world. The acquaintance of medicinal grass was remarkable, to which was entrusted the cure of every disease. The fundamental garnishments of the School are collected into Regimen Sanitatis Salernitanum or 'Flos medicinæ Scholæ Salerni', a treaty of medical literature and popular wisdom, wrote with leonini verses, which is inspired to the simple's virtue and to the garnishments of rigid physical and moral hygiene.

People placed considerable trust in the therapeutic qualities of plants. One of the most popular beliefs was that only “Contra vim mortis non est medicamentum in hortis”, in other words only the power of death could not be treated with medical plants. The most representative characters of this school are Costantino the African, translator of Arabic works, the famous Arnaldo da Villanova (who was considered one of the wisest man of his time) and Matteo Silvatico, who wrote Pandette, a book which illustrated several vegetable remedies.