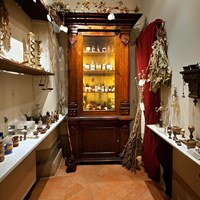 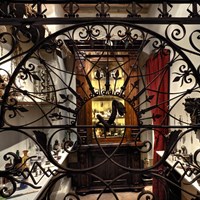 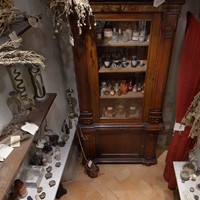 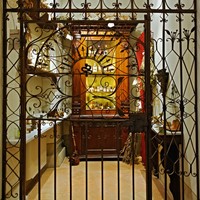 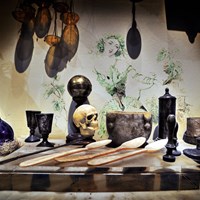 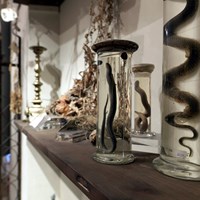 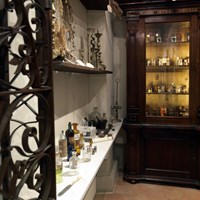 In this small isolated room, the pharmacist kept under lock and key the toxic products that in the wrong hands could cause harm.

Thanks to his ability to accurately dose even the most potent of poisons, only he could create effective medicines.

The symbols of death discourage even the most daring customers: skulls, snakes and a heavy wrought iron gate featuring a viper with wide open jaws keep the precious and dangerous contents safe. 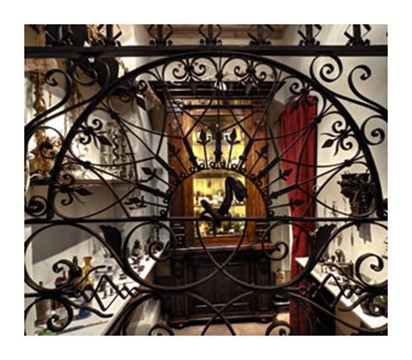 There are a large number of deadly poisons among medicinal drugs.
Pharmaceutical science renders these dangerous substances medically healthful. In tiny doses, they become precious antidotes.

The famed King Mithridates VI, who took to ingesting poisons out of the fear of being murdered, managed to achieve a state of immunity that came to be called mithridatism. The Greeks prepared hemlock poison for those condemned to death, such as in the famous case of Socrates.

The powerful Borgia family was famed for using poison as a weapon in political intrigues. Shakespeare used poison to create intensely dramatic atmospheres. Hamlet's father is killed with herbona juice poured in his ear. Romeo gets a "mortal drug" from the apothecary to kill himself on Juliet's tomb.

The storage of poison requires the greatest of precautions. Historic apothecary guides suggested a separate locked place just as is still dictated by Italian legislation for pharmacies.